"I call her Amity" by Melissa Struhs

Hello again bloggers! It has been a huge few weeks for the Colour Blast team as we come off the back of the Brisbane Scrapbook and Papercraft Expo in Brisbane. This year, I was invited to teach with Krisy Podolak and Michelle Grant in the Colour Blast classroom. This canvas was the key piece that I had been working on for my Tutor Display. It has been quite the labour of love, for months on end she has been a work in progress sitting on my dining table in a million tiny pieces. It is no surprise to most people that I never do off the page projects...but this event called for me to extend myself and try something new. 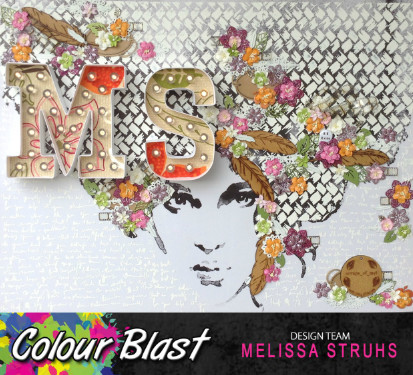 Here is how she began....a simple image on a canvas that I scored in the clearance aisle at Kmart. I truly can not draw or paint faces, to have a starting point made life so much easier. I made some decisions quite quickly, I wanted her to be crisp and white with bold splashes of tropical colours. this way, it would really fit with the décor in my home and I was hoping she would be so gorgeous and would need a huge wall to hang on. 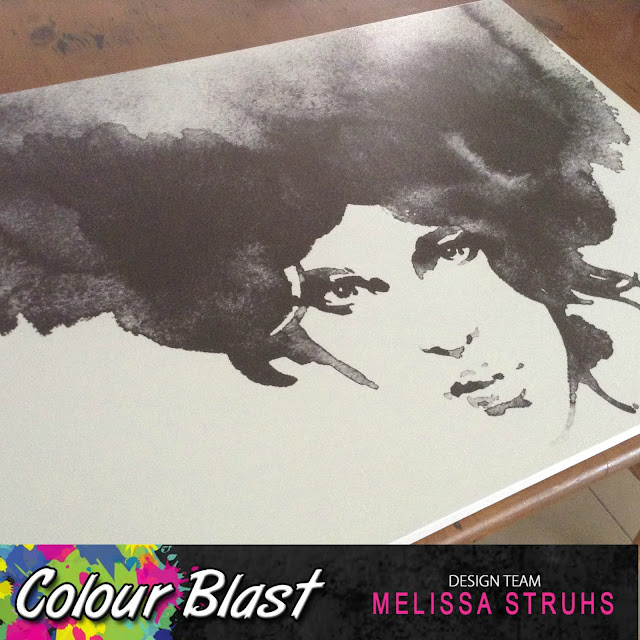 I have been allowing my 2 pots of White Heavy Gesso to thicken since I got them, every time I sat to work...they were open and then are super thick now. The white space to the sides of the face had large open spaces, so a simple script stencil was used to infill around the hair and to define her jawline. 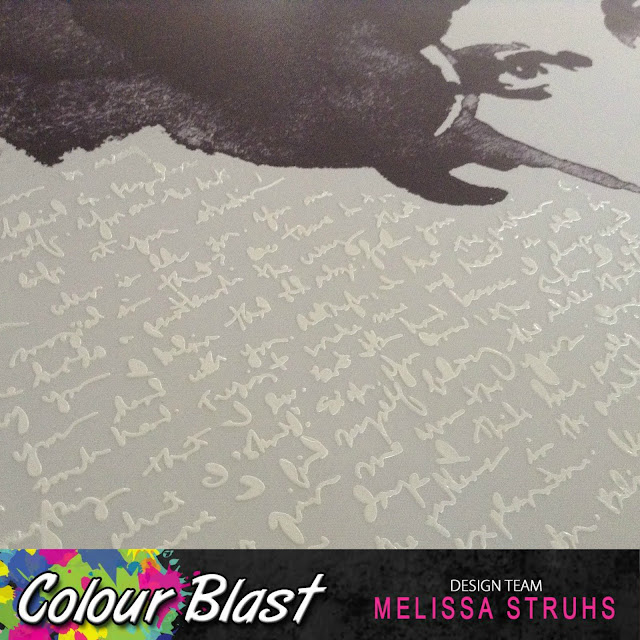 The great thing about the dark image, it was very easy to see where the stencilling should stop and start. 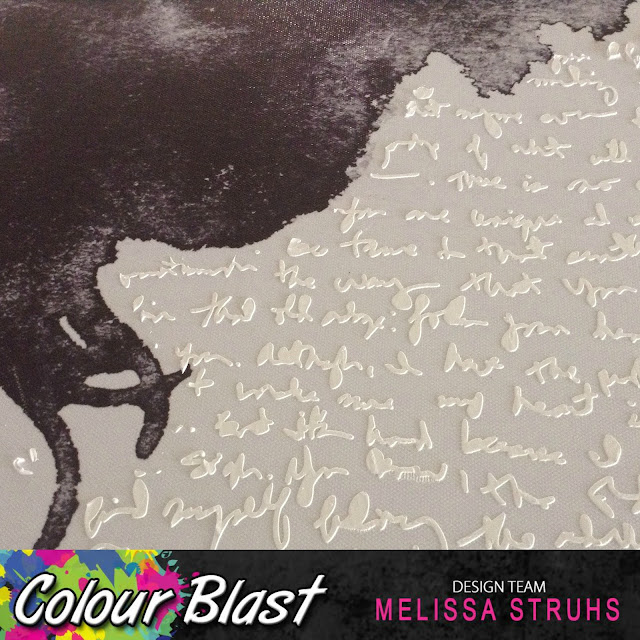 The unstructured script looks quite whimsical and I really love the tone on tone effect. 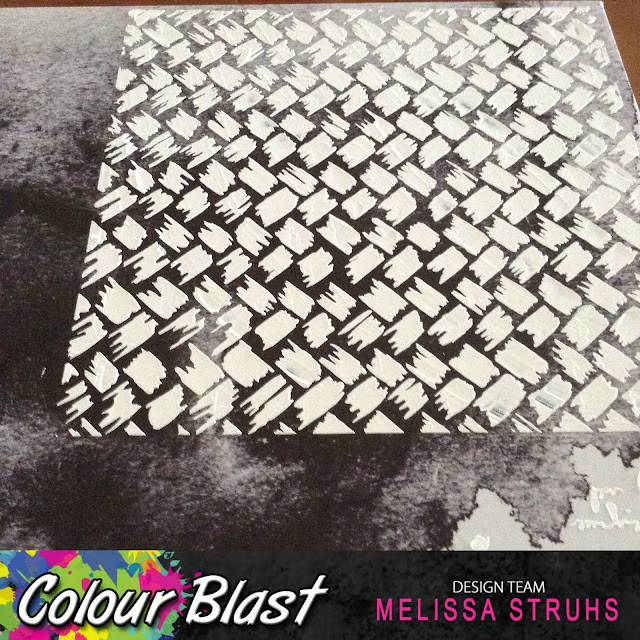 The dark hair was the next thing I knew I wanted to alter. A 12x12 rattan stencil was layered several times to soften the look. I left the gesso to dry naturally between each panel. This always gives me a tonne of time to try and figure out what would be next. 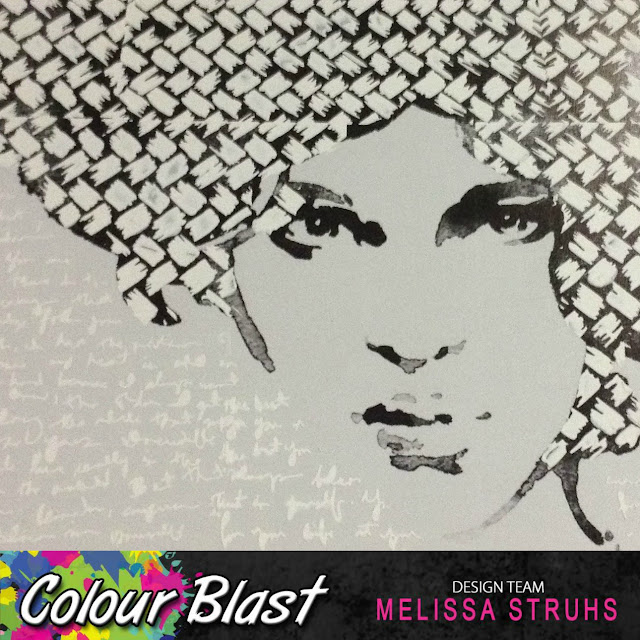 Once it was all complete, the definition was brought entirely back to her facial features. 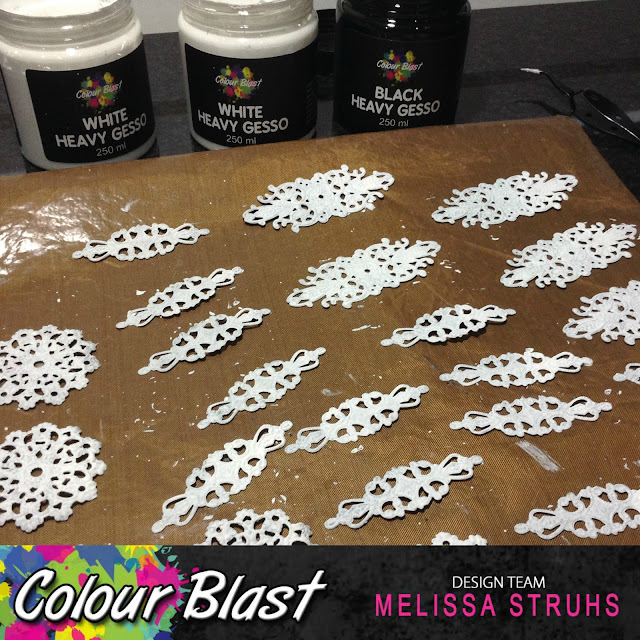 For the next few weeks, I painted several layers of white gesso over metal filigree embellishments, all assorted styles and various sizes. I really had no idea how many I would need so I painted 10 to 15 of each. 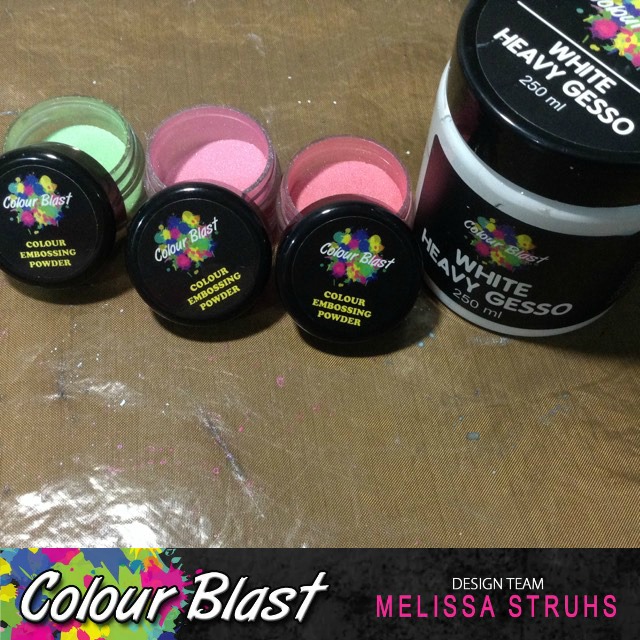 The Colour Embossing Powders in Apple of my Eye, Blush and Punch were used to bring pops of colour to more metal embellishments and chipboard pieces. 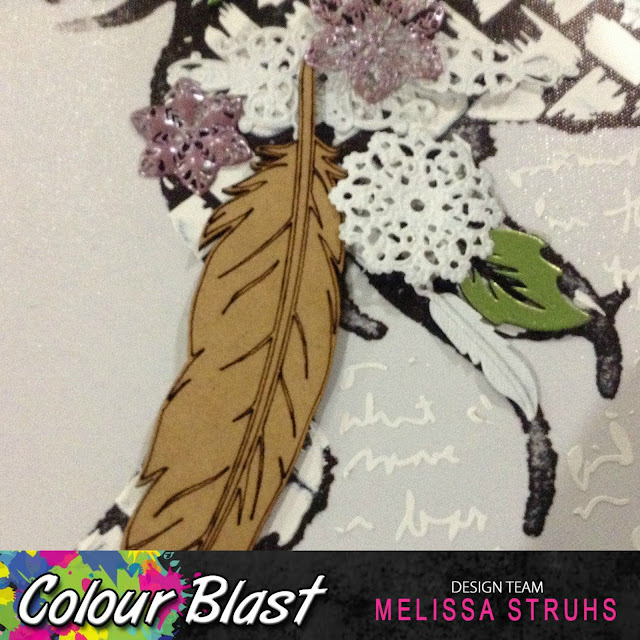 I had in my mind that all of these pieces would layer throughout her hair, mixed with wood veneer shapes too. 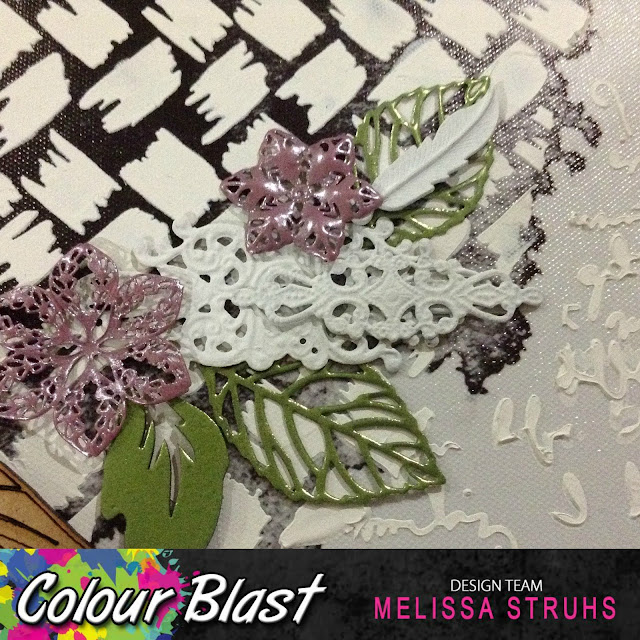 Lots of texture was built as I laid out pieces, though they were probably moved several more times. 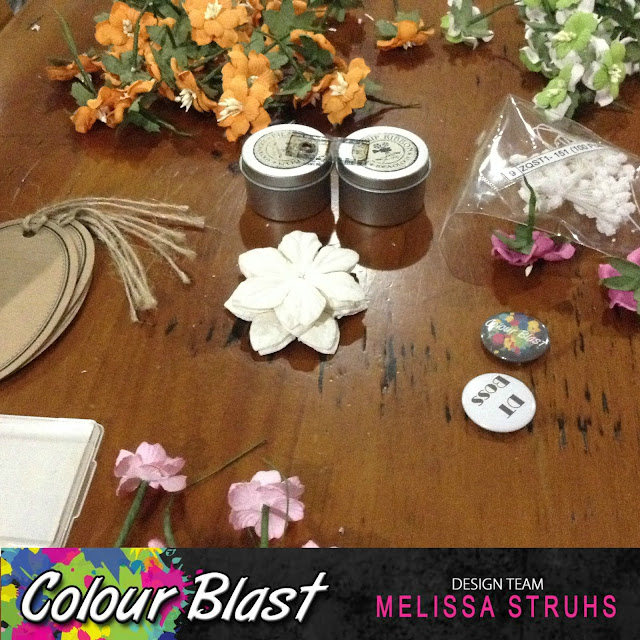 My 5 foot dining room table became a place to gather any products that I thought I would like to add. Simple paper flowers were given the Sunbleached look, see my previous post from 2 weeks ago for a full tutorial. 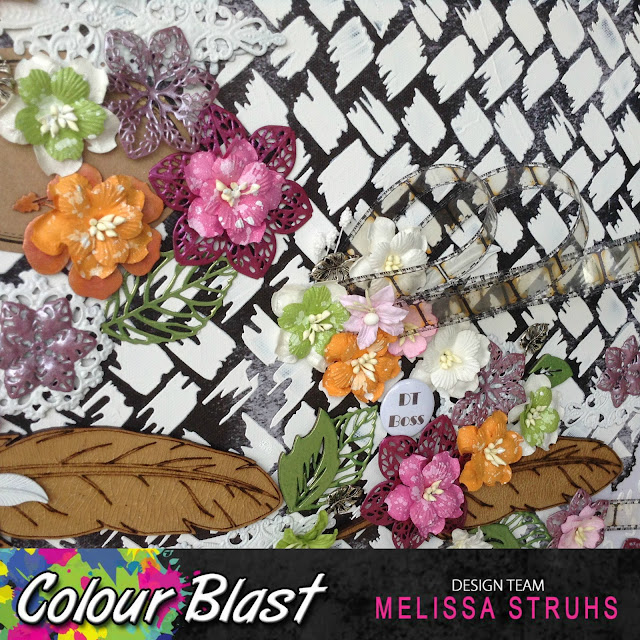 All of these elements, were in piles all over the table and about 2 weeks out from the show, I sat for several hours and attached everything with a gel medium. Placing them as I went, I would add a burst of colour with a flower or metal embellishment. 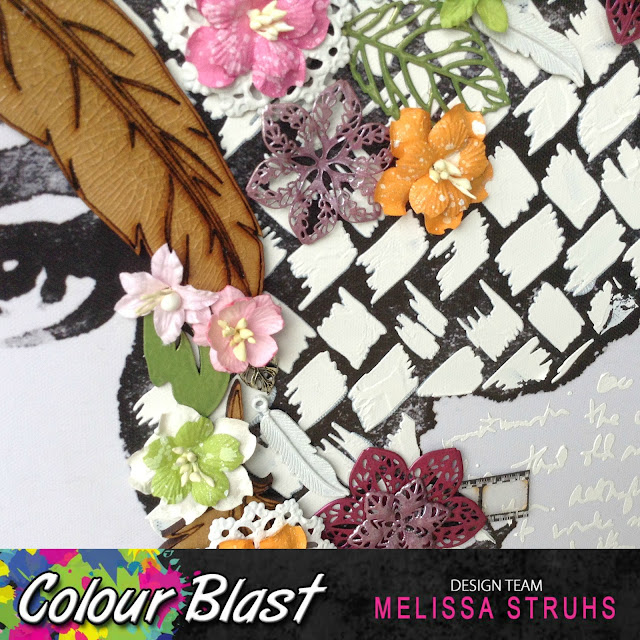 Everywhere you look, there are so many cute clusters and all very different. Now that the show has come to an end, I have visions of including some black and white mini print photo's to celebrate the occasion before having it framed. 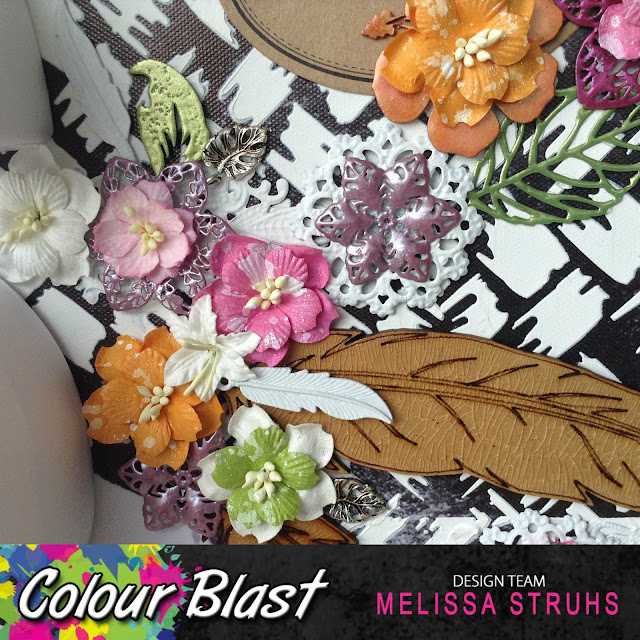 I am sure lots of Colour Blast fans saw the social media blitz over the weekend... selfies of the team, the tutors in the classroom and the gorgeous product in display in our booth and messages wishing they were with us. One last pic, one of my favourite people in front of my display. Amanda and I have been scrapping pals for longer than I can remember and she made sure we took that photo early one morning. I love that we have Colour Blast events to look forward to.... 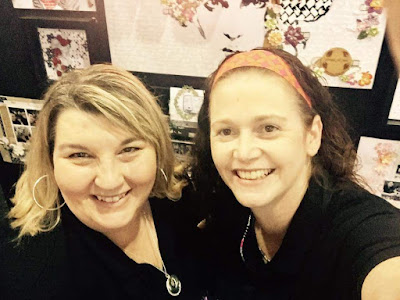 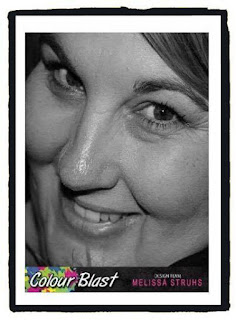