2 for the Price of One by Krisy Podolak

Hi Everyone, Today its's my share and I have two scrapbooking layouts to share with you. They are both completely different but I have limited shares left for the year and I want to make the most of them.

The first is a layout that was really basic to put together but looks awesome. 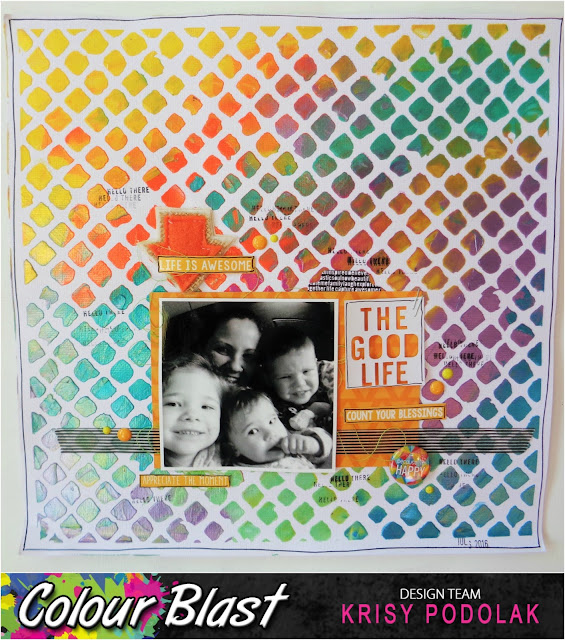 To start I made the background. This is how simple it was....I took a 12x12 stencil and layered on the Colour Paste. I wasn't neat. I didn't care if the colours over lapped I just smeared them on with my palette knife. I used a whole heap of the Colour Paste colours: Tangareen, Royalty, Deep Water, Rose Petal and Sunshine. 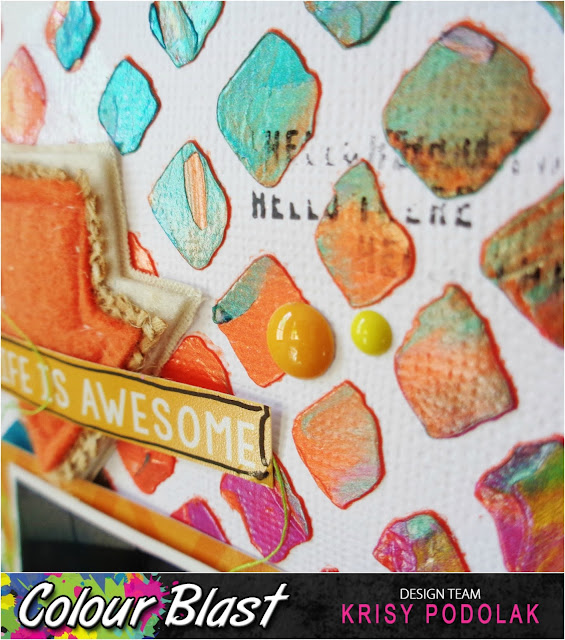 Once it was dry (in my case a few months later), I finished it off. I added a bit more detail with my small roller stamp and some Stayzon ink. I just stamped straight on to the textured background randomly. Then I added a few embellishments. 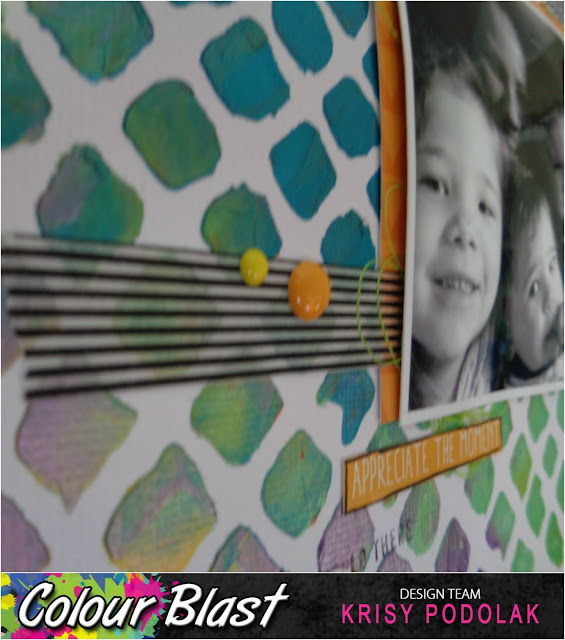 The second layout I want to share today is using the Shimmer Dusts but in a traditional scrapbooking way. Mixed Media scares a lot of people but you don't have to go all out and create heavy mixed media layouts. In this layout, I didn't use them to create a full mixed media background as I normally would. I took my layout inspiration from a Blog Challenge Sketch and instead of interpreting parts of the sketch as embellishments, I replaced them with mixed media using the Colour Shimmer Dust.

This is the sketch I was working with from the online Scrapbooking Challenge Blog - Scrapbooking Top 50 Australia. 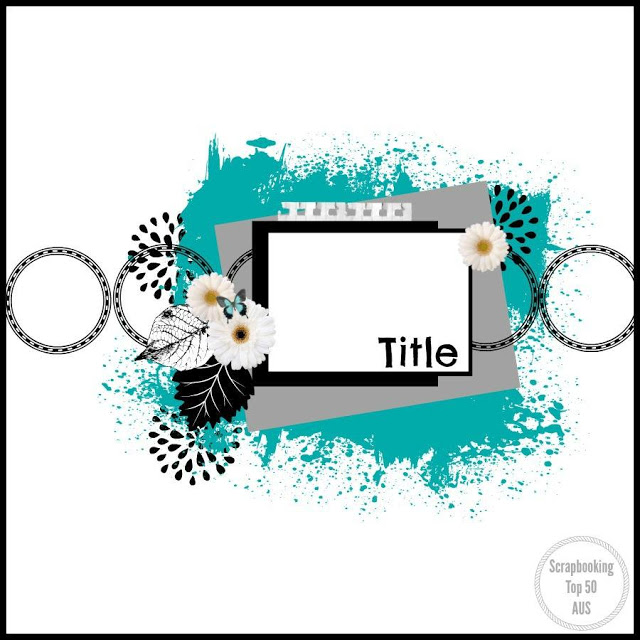 Now I know the image looks very mixed media, I decided to switch it up a bit. I used patterned paper as my base and then added the mixed media over the top. 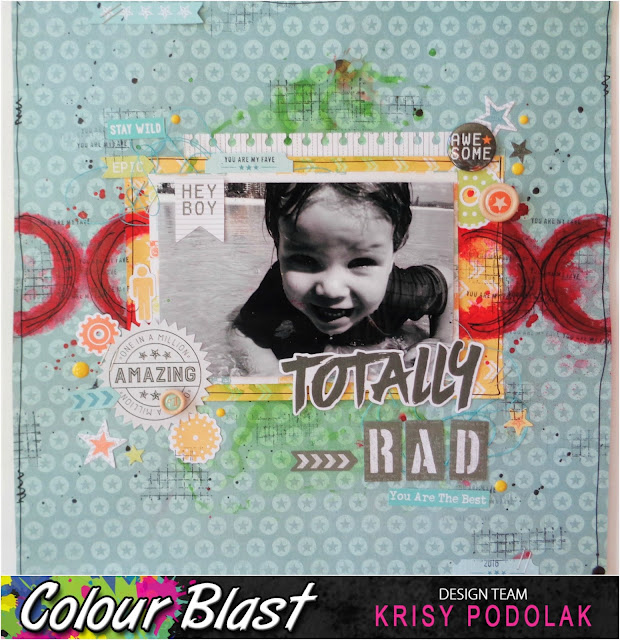 I used paper from the Cocoa Vanilla "Totally Rad" Collection and then added my mixed media over the top. I used some Lush Shimmer Dust mixed on a piece of packaging and "smooched" it onto the paper behind where the photo was being placed. Once it was dry I then added some texture over the top by stamping with some Stayzon Black Ink. I then added in all the other obvious elements of the sketch, the matte behind the photo, the torn notepaper along the top of the photo. 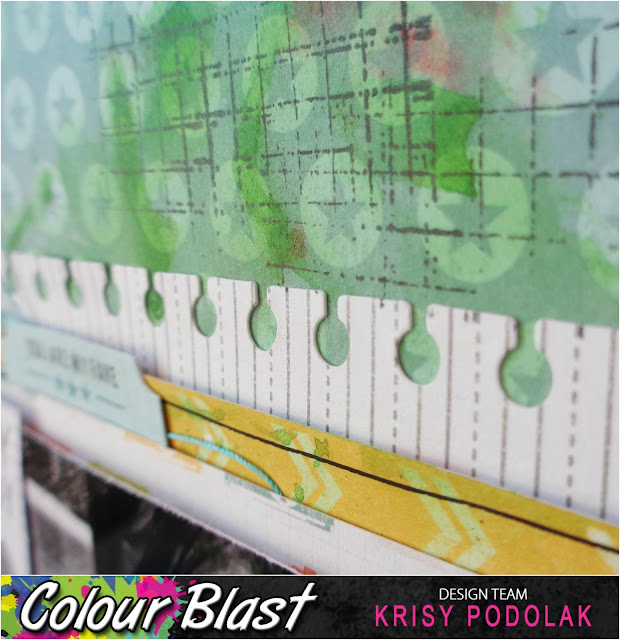 Then I added in the circles. To make them dark, I used my Candy Shimmer Dust and dipped the tip of a wet paint brush directly into the pot and painted it onto the page. I also used a water mister to move the colour directly on the page. This was to make sure the circles weren't "neat". I also mixed up some extra and splattered it around the red parts of the page. 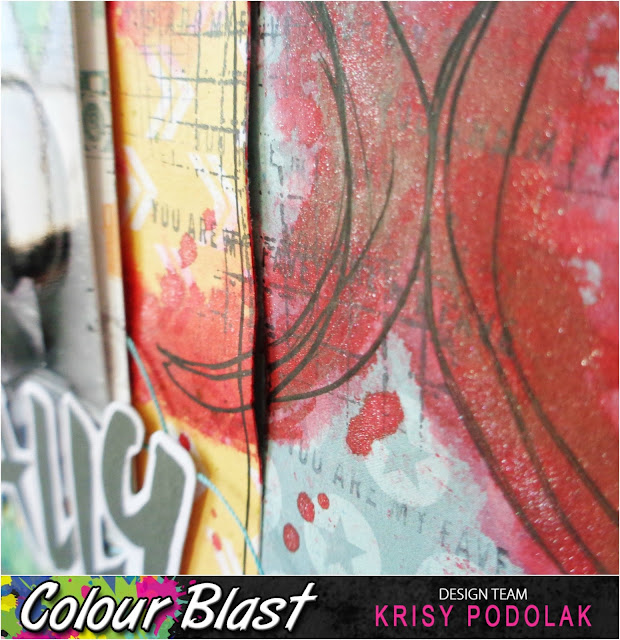 Once it had dried, I added all the circle embellishments and the title and that was it. Well, I thought that was it until I was laying in bed later that night and I realised it needed some thing more. So I took out my black posca pen and doodled around the circles to tie them into the layout a little more. By doodling around the outside of the page and around the photo tied the whole thing together. I finished it off with a few splatters of Road Base Colour Spray.

And that's my two shares for today. Don't let your Colour Blast products just sit in your stash. You don't have to used them for full blown mixed media all the time. It is easy to incorporate it into your traditional scrapbooking. Look at challenge blogs for some sketch inspiration and see what you can come up with. 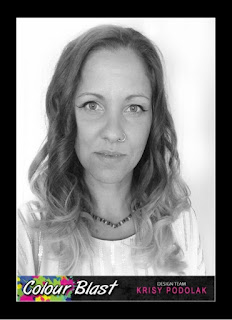