Hello lovely people, Tracey Campbell here again today to share my creation with you. Have you ever had an idea in your head and when you go it execute it, it doesn't work out how you planned and turns into a red hot mess?? Well that was me today - I wanted to create a layout with a Mandala on it using the Entangled patterned paper from the Find Paradise Collection but it didn't go as planned. 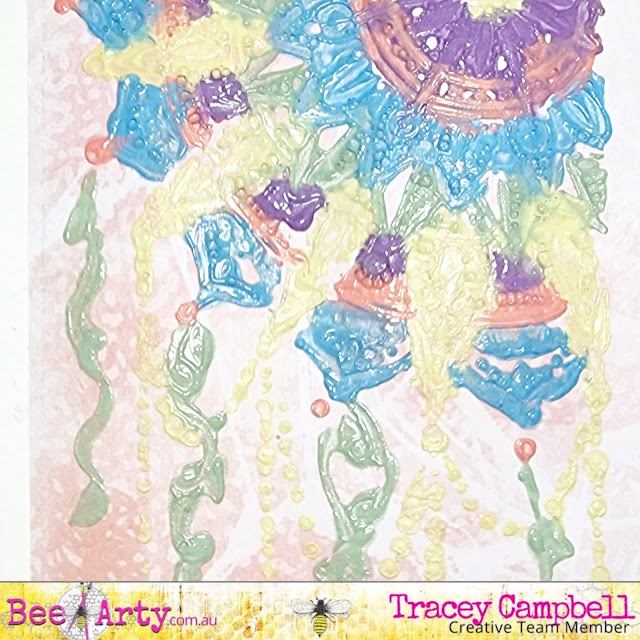 I ended up with this!!! But from mistakes beautiful things can be created, so stick with me and I will show you have my mess turned out to be a beautiful mistake. 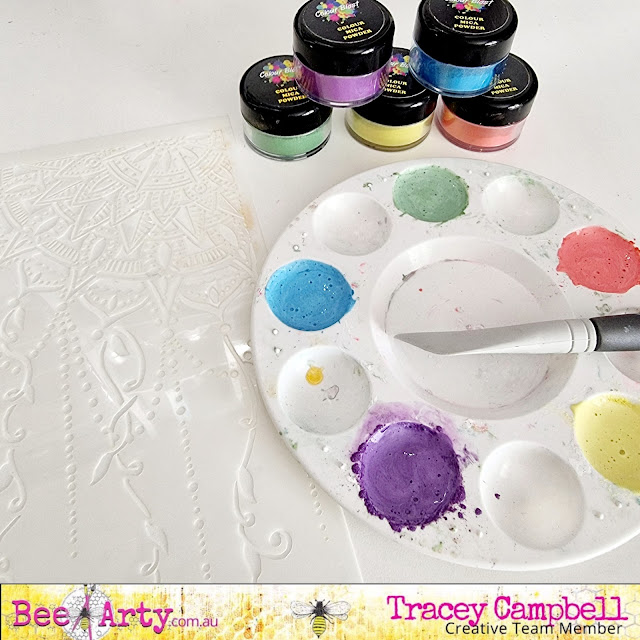 I started by mixing some clear Gesso with some Colour Mica Powders in Sage, Polar, Peach Nectar, Lemon Zest and Wisteria to create coloured Gesso. Now this was my mistake, the clear Gesso was too runny, I should have used the Colour Blast Heavy White Gesso instead. 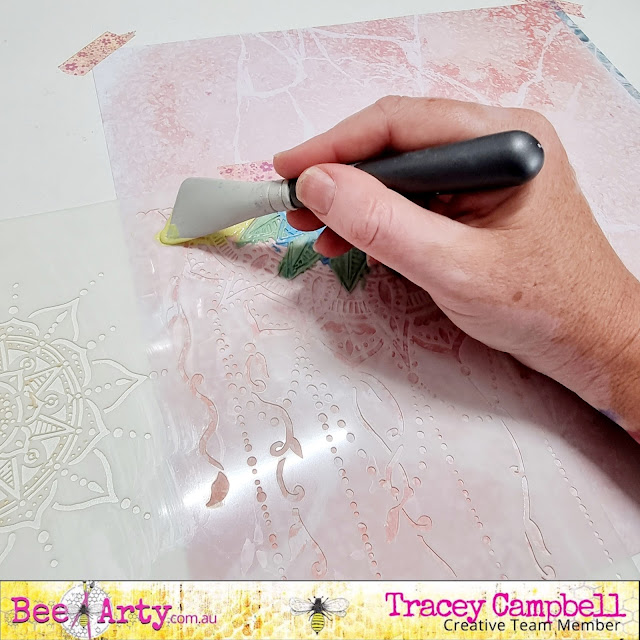 Using a silicon paint palette I spread the coloured Gesso through the Boho Mandala stencil on to the Entangled pattern paper. 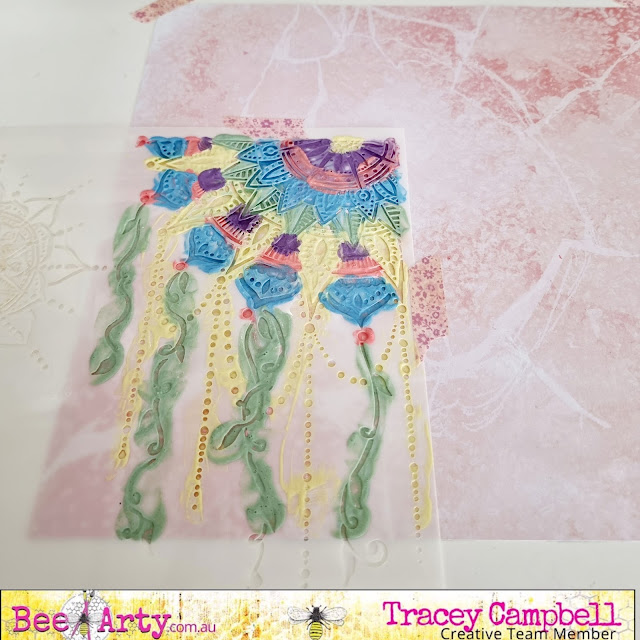 I used all five colours to create a nice pattern to the mandala. Tip: when doing a large amount or fussy stencilling use a bit of washi tape to hold your paper and stencil in place.

When I lifted the stencil off the paper, I discovered that the Gesso was too runny and had bleed under the stencil creating this mess. I was really disappointed with it and was going to give up and throw the sheet of Entangled out, so I started my clean up. 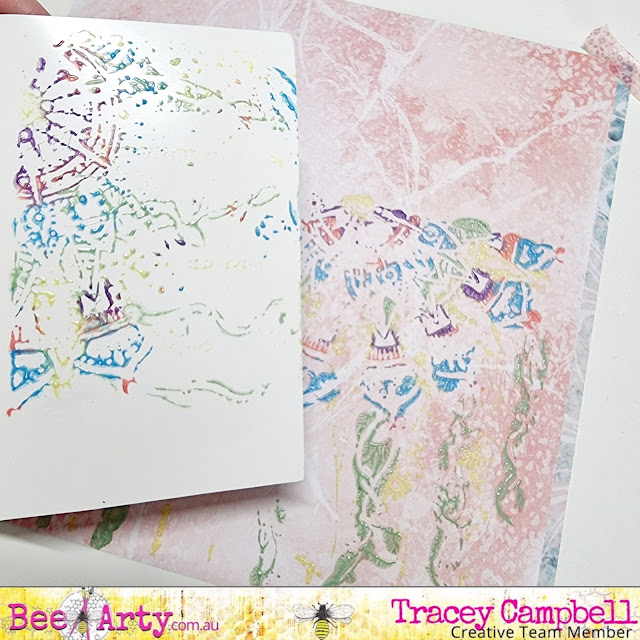 I flipped the stencil over and pressed it down with a scrap of cardboard to get off the excess Gesso. When I took the stencil off the paper again I discovered a soft imprint of the Mandala, on both the Entangled paper and the scrap of cardstock, giving me an idea. 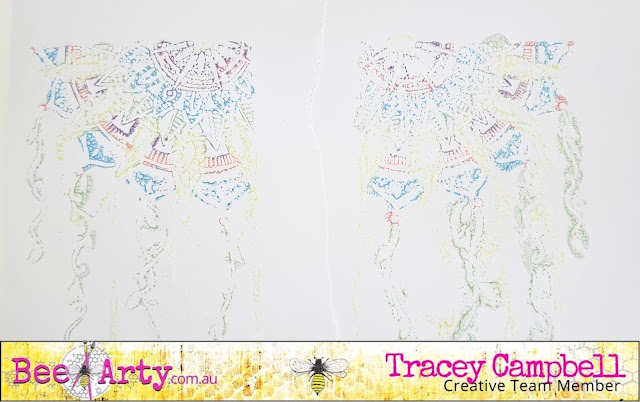 I grabbed some white cardstock and place the Boho Mandala stencil between them and ran my palm over the backside of the cardstock. I now had two soft images of the Mandala, which I thought were lovely and my mind was running away. I scrapped my original idea to do a layout with a Mandala and instead decided to create a dream catcher. 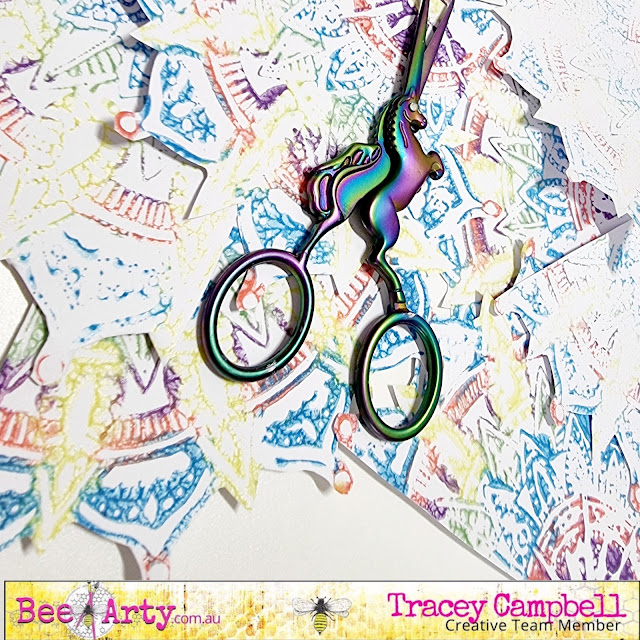 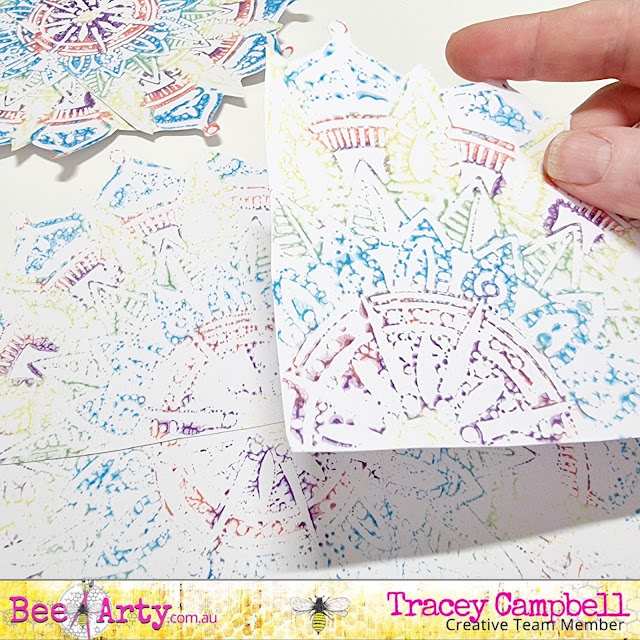 And stuck them together to create a Mandala, actually had enough images to create two. 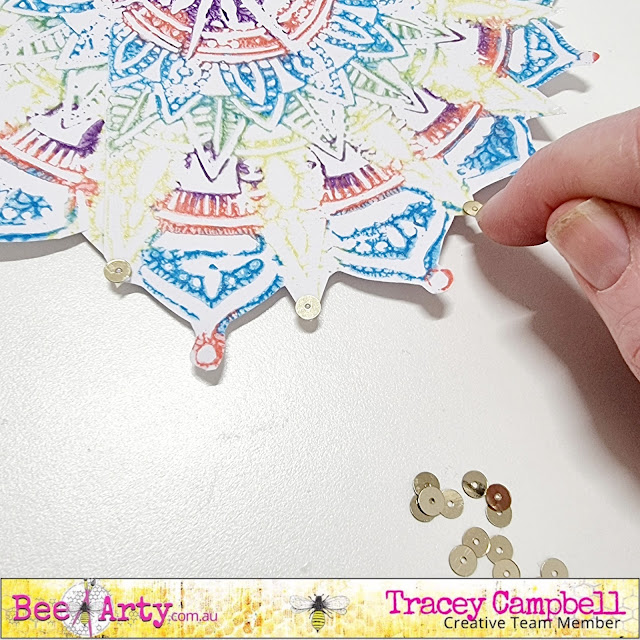 Next I used sequins and gems to decorate. 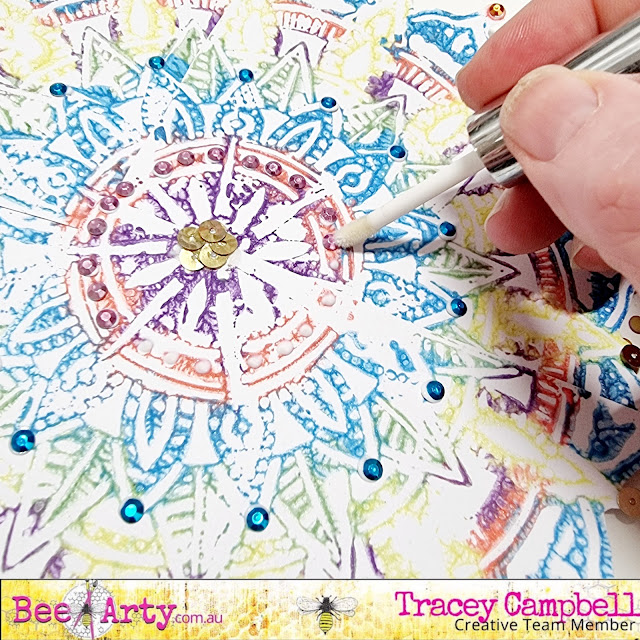 To turn the mandala into a dream catcher I painted the feathers on the Free Vibe pattern paper from the Bohemian Bliss Collection with Colour Shimmer Cubes. If you don't have the Shimmer Cubes you can make use the Colour Shimmer Spray to paint them. I picked five colours that matched the Colour Mica Powders that I made the coloured Gesso from: Sunshine, Apple of My Eye, Punch, Singin the Blues and Lovely Lilac. 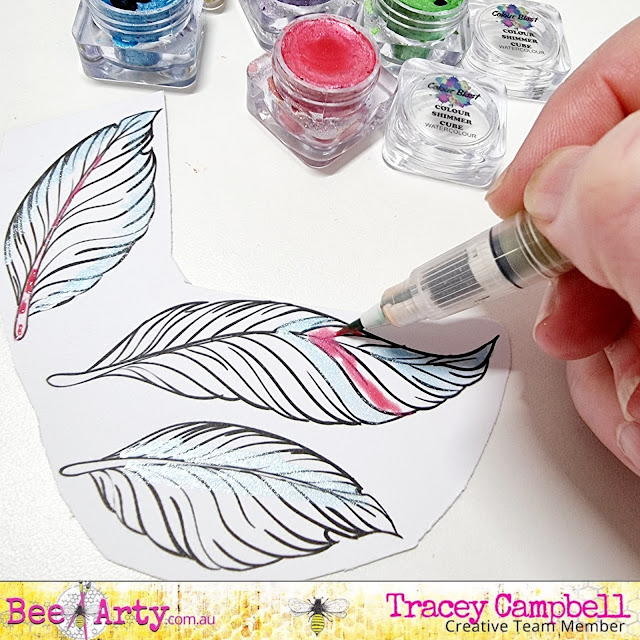 Once dry fussy cut them out. 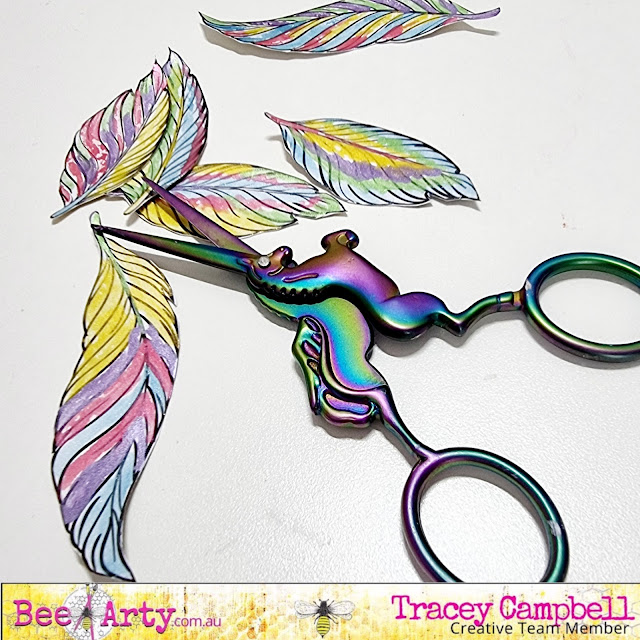 I then glued some gold sequin string to the back of the feather and the Mandala. 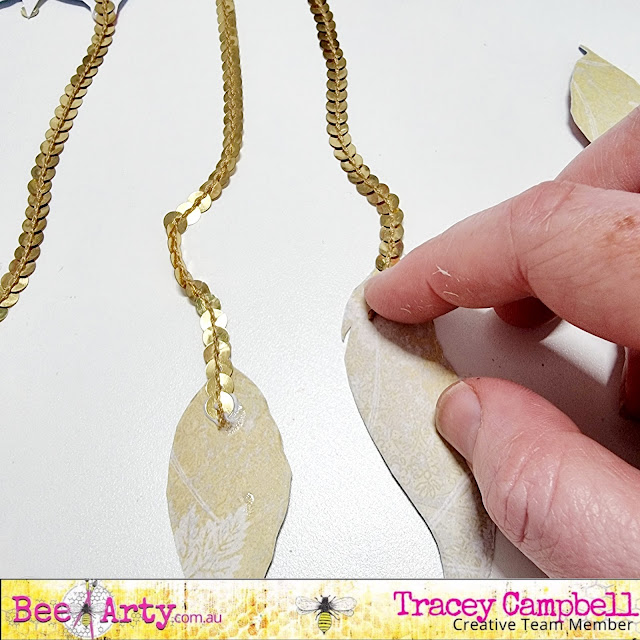 Here is how it turned out, such a fun and pretty Dream Catcher - my beautiful mistake 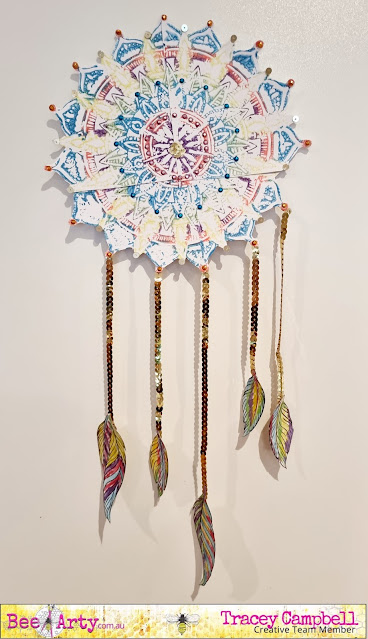 A few photos of the details in close ups below. 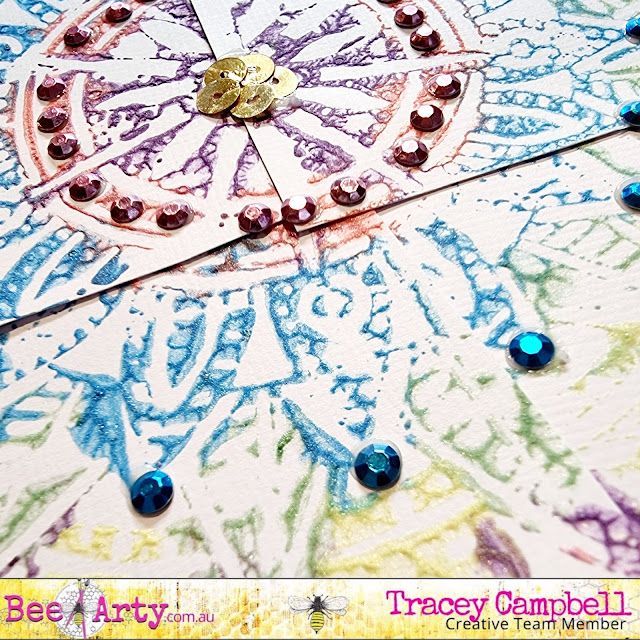 I am still thinking about using this on a layout and now that I have a spare Mandala I just might, so pop back into the blog in a few weeks to see what I come up with.
Hugs
Tracey